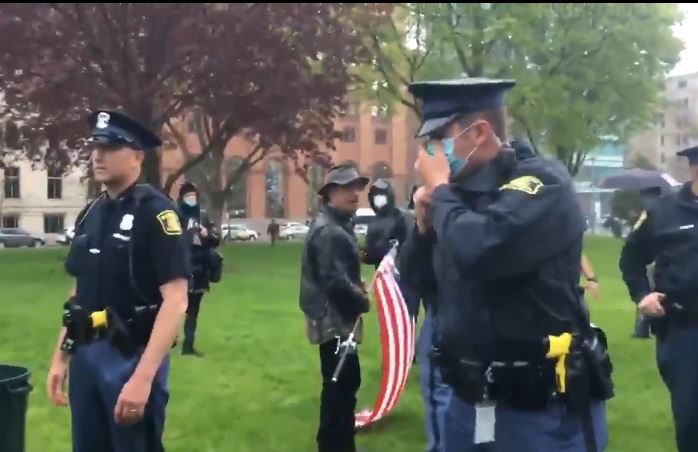 The Michigan state Capitol was closed Thursday as demonstrators gathered at the steps of the building to protest Gov. Gretchen Whitmer’s stay-at-home order.

Despite heavy rain, armed protesters gathered Thursday at the State Capitol in Michigan in what the organizing group, Michigan United for Liberty, has branded “judgment day.”

This was the third planned demonstration since Michigan has been under a stay-at-home-order from Democratic Gov. Gretchen Whitmer to slow the spread of the coronavirus.

The latest protest and the Capitol’s closure came two weeks after protesters, some armed, entered the building and demanded to be allowed into the legislative chambers, which have been closed due to social distancing measures.

Photos from the day showed some protesters, many of whom were not wearing masks or standing more than 6 feet from one another, screaming at law enforcement officers who were keeping them out of the chambers.

The Senate and House were both out of session Thursday — adjourned until next Tuesday — leading Michigan State Police to close the Capitol to the public per protocol. The coronavirus pandemic has already led lawmakers to work remotely and pare down in-person sessions.

The protest, drew a crowd of roughly 200 “at the high point” of Thursday’s event, according to Michigan State Police estimates. The crowd later dwindled to about 75 people, according to the state police.

A man at the demonstration was seen on video carrying what appeared to be an American flag with a naked doll with long black hair hanging from a pole with a noose around its neck.

Protesters were seen and heard screaming as one man was trying to take the flag away from the man carrying it.

There was one altercation between two protesters, in which one tried to take a sign out of another’s hand, state police said. One of the protesters involved was in possession of an ax, which was turned over to law enforcement.