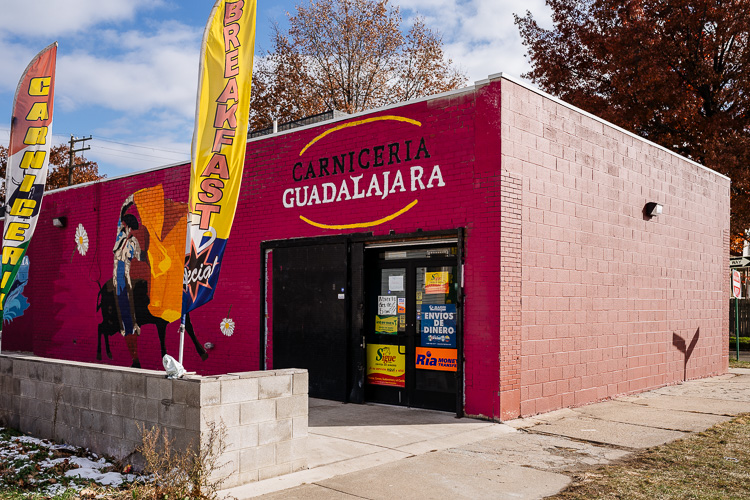 Several decades ago, Salvador Enriquez arrived in Detroit, saw the lack of Hispanic businesses in the market, and decided to start his entrepreneurship project.

“I had worked as a butcher since I was a child,” says Salvador. “I came to California and worked in a meat shop for many years.”

But at the end of 1999, he decided to come to visit his sister in Detroit and noticed a few Hispanic businesses. “I decided to return to California, finish some things I had pending, and came back to Michigan. I started the butcher shop on Springwells Street 20 years ago.” Thus, Carnicería Guadalajara was born.

He says his business was growing little by little in different locations. He decided to open other two shops, which he called #2 and #3. He says that in the end, he kept # 2, located at 1630 Landale St, because he couldn’t handle all three.

“Then, I focused on this butcher shop located in this building. We built it between my daughter Adriana and me to establish a more variable business and to be able to provide better service to our clients,” he says.

As he says, he went from selling meat to including a Grocery market and a small Restaurant. “We included vegetables, sodas, milk, and everything else that the family buys to meet their basic needs.”

Since the moment when he decided to transform his #2 butcher shop, 20 years have passed. “All this time, we have been working, creating sources of employment. Creating better services for our community.”

And it is precisely the desire to serve the community that motivated him to stay in this country and come to Michigan. For many, Detroit’s decline has been the reason to leave, but for Salvador Enriquez, it was the opportunity to create a positive impact on the community.

“I noticed how Detroit was so destroyed, and I thought: we are going to help restore the city, and I think we are doing it,” he says.

He considers that his business allows many people to have the opportunity to get top quality products without having to leave the neighborhood.

“Our supermarket is close to the people, within the neighborhood, they don’t have to walk or drive too far,” says Salvador. “Besides, we always have a wide range of products for the community.”

Salvador considers that businesses like his are helping Southwest Detroit improve. A few years ago, everything was destroyed or burned, right now, a much brighter neighborhood is seen, and more people are striving for the area to boost.

“People now are fixing their properties and aiming to create a city with a better aspect than it was before. The interesting fact is that mainly Hispanic are the ones doing it. With effort and commitment, we are making this city safer, getting along with other communities while in the process,” he concluded.

The Southwest Detroit: More Than A Place exhibition ended