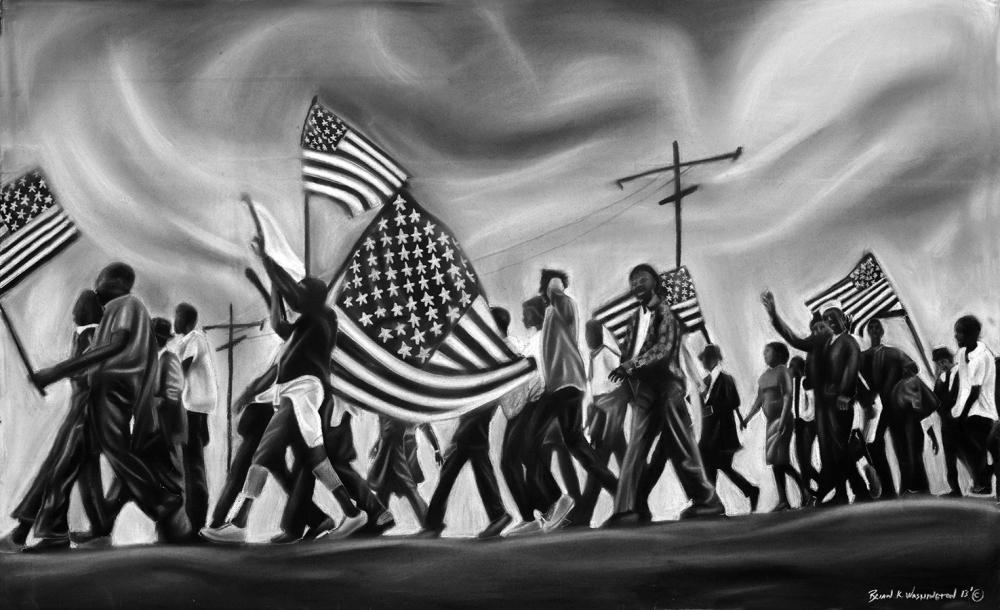 In recognition of Black History Month and President Gerald R. Ford’s efforts dignifying the contributions of African Americans, the Gerald R. Ford Presidential Museum is hosting an exhibit by nationally-acclaimed artist Brian Washington.
Washington’s “The Continual Struggle: The American Freedom Movement and the Seeds of Social Change,” is an ongoing body of artwork documenting the Civil Rights Movement and America’s historical struggle against segregation and other forms of race-based injunctions. The 23-piece exhibit vividly recalls a time when people were willing to go into the streets to protest injustice and inequality, according to the artist’s website.
“With this exhibit, I hope to elicit the raw emotions from the atrocities African Americans struggled with in years past and bring them to the forefront in today’s cultural lessons,” Washington said. “I want people who see ‘The Cultural Struggle’ to come away with a renewed sense of empathy and humility for those who came before us.”
While attending Duke University, Washington, a world-class self-taught artist and award-winning Los Angeles based attorney, became increasingly aware of the social injustices and inequalities surrounding him. As a way to honor those who fought for freedom and equal rights before him, Washington began a year-long independent study developing his concept for what would become “The Continual Struggle, Edition 1.”
In 2003, Washington’s 11-piece first-edition series, formally titled “The Continual Struggle: The Civil Rights Movement – Yesterday, Today, and Tomorrow,” was acquired in its entirety by the Smithsonian Institution, and placed in the permanent collection of the Smithsonian-affiliated National Underground Railroad Freedom Center in Cincinnati, Ohio.
Thirteen years later, Washington’s second edition of The Continual Struggle, titled “The Continual Struggle: The American Freedom movement and the Seeds of Social Change,” opened at the Lyndon Baines Johnson Presidential Library and Museum in Austin, Texas.
“With President Ford’s notion to expand Black History Week to an entire month-long proclamation, the Gerald R. Ford Presidential Foundation is honored to display Brian Washington’s critically-acclaimed masterpiece,” said Elain Didier, director, Gerald R. Ford Presidential Library and Museum.
While in office in February 1975, President Ford stated, “It is most appropriate that Americans set aside a week to recognize the important contribution made to our nation’s life and culture by our black citizens. With the growth of the civil rights movement has come a healthy awareness on the part of all of us of achievements that have too long been obscured and unsung. Emphasis on these achievements in our schools and colleges and in daily community life places in timely perspective the benefits of working together as brothers and sisters regardless of race, religion or national origin for the general well-being of all our society. In this spirit, I urge my fellow citizens to be mindful of the valuable message conveyed to us during the celebration of this week.”
The following year in 1976, President Ford proclaimed a tribute to Black History Month in admiration of the impressive contributions by African Americans:
“The last quarter-century has finally witnessed significant strides in the full integration of black people into every area of national life. In celebrating Black History Month, we can take satisfaction from this recent progress in the realization of the ideals envisioned by our Founding Fathers. But, even more than this, we can seize the opportunity to honor the too-often neglected accomplishments of black Americans in every area of endeavor throughout our history.”
Brian Washington’s “The Continual Struggle” at the Gerald R. Presidential Museum is made possible through collaborative efforts with Fifth Third Bank, the Frey Foundation and the Gerald R. Ford Presidential Foundation. “The Continual Struggle” will be on display Feb. 20-May 31.