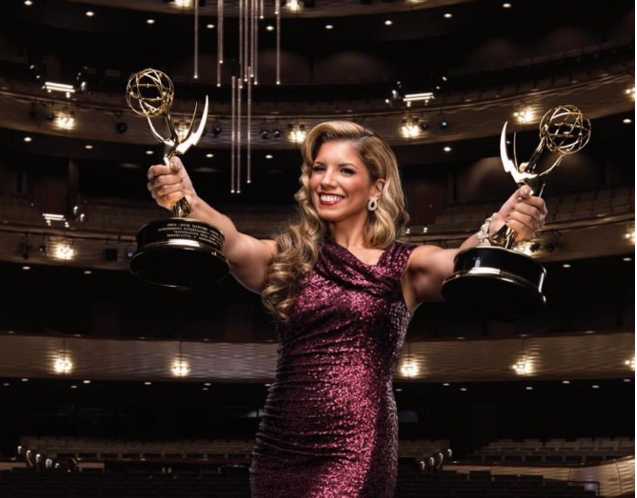 Bestselling author, speaker and 3-time Daytime EMMY winner Gaby Natale has been named as a recipient of the 2021 Maestro Award, the highest distinction given by Latino Leaders Magazine.
“This is a great honor for me. As a Latina immigrant who started fresh in a new country with no family of connections, I don’t take for granted the privilege to represent our community and elevate our voices. Not everyone knows this, but early in my career I worked as university professor. So, to receive an award named Maestro feels like a full circle. I still have a passion for sharing what I learned along the way. I just now have a much bigger classroom”, explains Natale.
The Maestros, formerly known as the Maestro Awards Ceremony, is a gathering of influential Latino Leaders across the country, intended to recognize and celebrate the achievements of members of the Latino Community. The Maestros have been an institution in the Latino community for nearly 15 years.
Gaby Natale will receive the Maestro of Ultimate Drive. As the first Latina to win 3 Daytime EMMYs back-to-back, the first Hispanic author to be published by HarperCollins’ Leadership division and one of the few foreign-born writers to narrate their audiobook in English, Gaby has had her own share of being “the first like her” in leadership spaces.
“The Maestro Award is the highest honor given by the publication to Latinos who have reached the pinnacle of their professional careers and inspire others to achieve greatness. We celebrate the success stories, accomplishments, and triumphs of many leaders that have made history, and continue to make history, in our community”, explains Jorge Ferraez, Latino Leaders Magazine publisher.
Past recipients include award winning journalist Maria Hinojosa, Gary Acosta (CEO of NAHREP – National Association of Hispanic Real Estate Professionals®), Ralph de la Vega (former chairman of AT&T), Antonio Tijerino (President of Hispanic Heritage Foundation), Nina Vaca (CEO of Pinnacle Group), Domingo Garcia (LULAC National President) and Thaddeus Arroyo (CEO, AT&T Consumer).
Maestro of Leadership – Joe Alvarado – Former CEO, Commercial Metals Co.
Maestro of Professional Achievement – Carlos Sepulveda – Chairman, TBK Bank
Maestro of Entrepreneurship – Evelyn Torres – CEO, Solaris Technologies Services
Maestro of Innovation – Alvaro Luque – CEO and President, Avocados from Mexico
Maestro of Ultimate Drive – Gaby Natale – President, AGANAR Media

The ceremony highlights the histories and past achievements of the awardees and, by way of an interview with Latino Leaders Magazine publisher Jorge Ferraez, focuses on the future of each recipient. To register for the livestream of the upcoming MAESTRO ceremony
About Gaby Natale and AGANARmedia
Gaby Natale believes in breaking barriers. And she embodies what she preaches.
As the first Latina to win 3 Daytime EMMYs back-to-back (as host and executive producer of her own show), the first Hispanic author to be published by HarperCollins’ Leadership division and one of the few foreign-born writers to narrate their audiobook in English, Gaby has had her own share of being “the first like her” in leadership spaces.
A sought-after thought leader and motivational speaker, Gaby has shared her inspirational message in Fortune 50 corporations, the United Nations and in her own TEDx talk encouraging underrepresented minorities to pioneer and be what they cannot (yet) see in the world.
Natale is among a few women in the entertainment industry who owns not only the rights to her content, but also a television studio. This unique situation has allowed her to combine her passion for media and her entrepreneurial spirit.
People magazine named Natale one of 2018’s “25 Most Powerful Latinas”, highlighting the inspirational story of how she went from a local TV show that started out of a carpet warehouse to becoming the only Latina in US history to win triple back-to-back Daytime EMMYs. Her popularity grew even further when her first book, “The Virtuous Circle” by HarperCollins, became an instant bestseller, topping Amazon’s New Releases charts in 3 different categories (Business, Inspiration and Self-Help).
Natale is also the founder of AGANARmedia, a marketing company with a focus on Hispanic audiences that serves Fortune 500 companies such as Hilton Worldwide, Sprint, AT&T, eBay, Intuit and Amazon. In the digital world, she has a thriving fan base with over 52 million views on YouTube and 250K+ followers on Social Media.
In 2019, Natale launched Welcome All Beauty, her own hairpiece and extension line dedicated to women who need to be camera-ready on the go.
A tireless advocate of gender and diversity issues, Natale is a frequent collaborator with nonprofits such as St. Jude Children’s Research Hospital, Phenomenal Woman Action Campaign and Voto Latino.
Natale has been featured in Forbes, CNN, Buzzfeed, NBC News, Univision and Latino Leaders magazine. She is the recipient of NALIP’s Digital Trailblazer Award and of a GLAAD Media Award nomination for her portrayal of Latino LGBTQ youth in media.
Natale holds a bachelor’s in International Relations and a master’s degree in Journalism from the University of San Andres and Columbia University. Prior to starting her career in television, Natale taught Communication and Journalism courses at the University of Texas.